Where The Pindan Meets The Ocean

THE red dirt of the Kimberleys comes to life in Tom Curtain’s new single and film clip, Where The Pindan Meets The Ocean.

The two-time Golden Guitar Award winner tells the story of Janice Bell who established Barn Hill Station Stay on the edge of the Indian Ocean while raising children on her own, building up a cattle station, and building a home for her family from mud bricks.

“I first met Janice Bell at a campdraft in southern Western Australia and she invited me to drop into Barn Hill on the way back to Katherine in the horse truck,” Tom said. 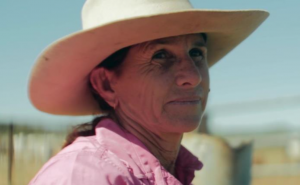 “When I arrived, there was something so unique about the place that struck me and I noticed her house was all made out of mud brick. She told me a bit of the story about the hurdles she had to overcome as a single mother on a cattle station in the remote Kimberley, 130 kilometres south of Broome, where she built the Barn Hill Station Stay Caravan Park.

“It was just her passion, self-belief and motivation that really blew me away. I asked why she decided to settle there, and she said,

‘It’s where the red pindan soil meets the ocean, the pindan soil sets like concrete so you can have year- round access without getting bogged in the wet season’. I said, ‘that’s a title for a song’ and asked if she’d mind if I wrote a song about it.”

Tom wrote the song on his way home to Katherine, with finishing touches from producer Garth Porter.

While Janice was initially hesitant about her story being told in song, she’s now starring in the video that details a small part of her life on Barn Hill Station near Broome. Tom directed the clip when he was there in June playing a concert.

The video stars her daughter, Bryden, with her baby, as a young Janice, before she transforms into Janice towards the end of the clip.

“I wanted to capture the emotion and the atmosphere. There are a lot of grey nomads and families that visit Barn Hill every year,” Tom said.

“Lots of people go there from all over Australia and pull up for a week or two and the kids go exploring, boating, fishing, play lawn bowls and cricket games – it’s just an amazing piece of Australia.”

Barn Hill Station is so special to Tom, it is the place he chose to propose to his wife, Annabel, last year. 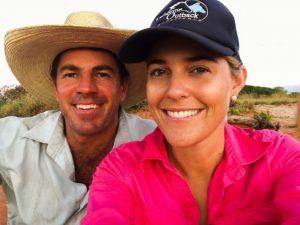 The Katherine singer-songwriter and horseman said the song and video had many messages for his audience.

“Barn Hill Station is an amazing getaway for families, nomads, couples – everyone should experience this phenomenal place,” he said.

“But, more importantly I wanted to highlight Janice Bell’s legacy. She was a single mother, faced with all these hardships, but just kept battling and has now come through the other side. Now her children and grandchildren can see what she’s built. I get goosebumps everytime I sing the song – for me it’s such a powerful song.”

Where The Pindan Meets The Ocean is one of the most popular songs from Tom’s album, Territory Time, and a crowd favourite wherever he performs.